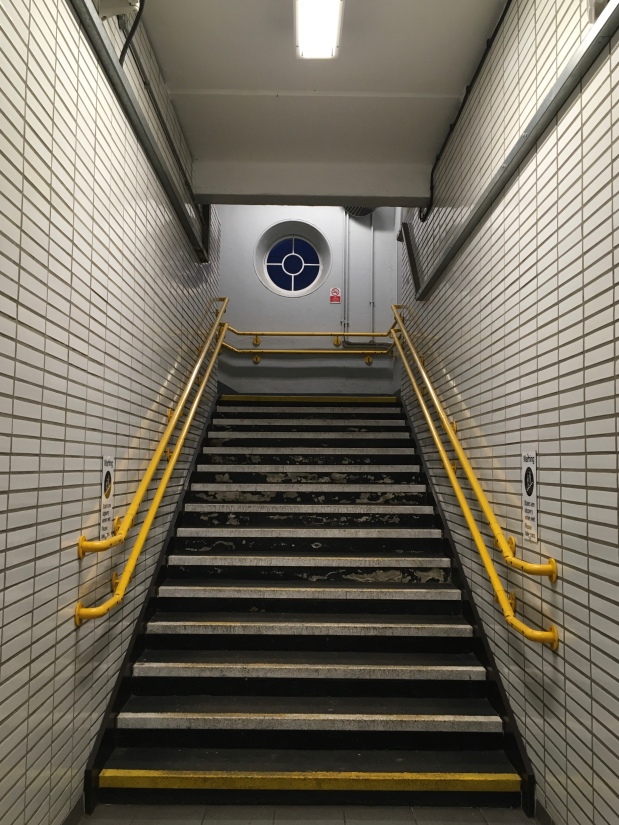 Stairs have been my arch nemesis for several years.

Not going down them, that was as easy to me as it is to you (assuming you are someone who finds it easy).

I still stand at the bottom, looking with fear, and brace myself for the pain that will be involved.

But there isn’t any pain anymore.

I can actually do it. 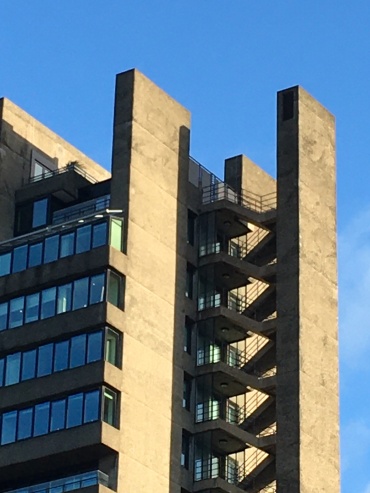 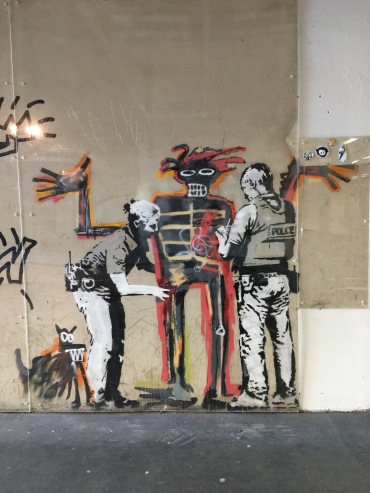 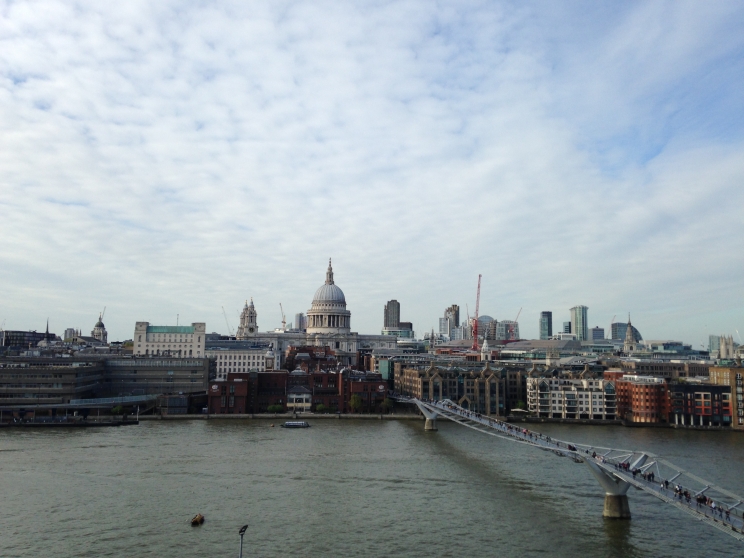 No violin. Just hanging out. And attending a hand clinic.

The clinic is part of London Bridge Hospital and is in the heart of the City. A charity is paying for it, thank goodness, hence London, hence in the City (by which I mean the City of London, a 1.12sq mile within the capital).

It was not lacking in grandeur, nor were the majority of the clientele lacking in suits, but the hand therapist was, fortunately, lovely.

I got quite excited by all her kit. It was as much like a craft session as a hospital appointment. She used thermoplastic, cut into shape, heated in a water bath to 70˚C and then moulded and recut into various shapes, to make me a collection of finger splints.

As if I hadn’t had my fill of being ‘ill’, I have trigger finger in my ring finger on my right hand. I’ve had it for some time, but just hadn’t had the capacity to sort it out before now, so this was a well overdue appointment. Fortunately, it’s the only finger for which the locking potential doesn’t affect my violin playing, but since I can’t tie my shoelaces, clean my teeth or cut a slice of bread it would be useful to sort it out.

What is trigger finger?

The tendons that run the length of your fingers travel through sheaths. These sheaths mean the tendons stay alongside the bones.

Trigger finger is caused by inflammation of the tendon, restricting its movement inside the sheath. A nodule may also form, which is what has happened in my case. Is it painful? I’m not good at monitoring pain, but it is certainly uncomfortable when it gets locked and bought tears to my eyes when it locked particularly badly in my appointment. So I guess the answer is yes. 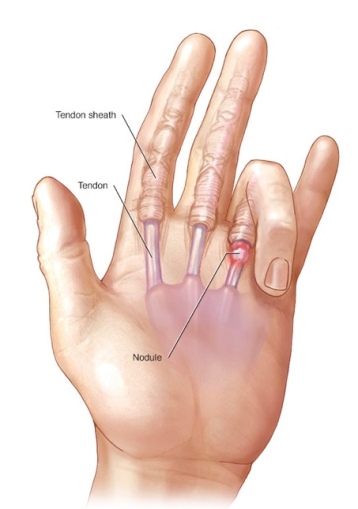 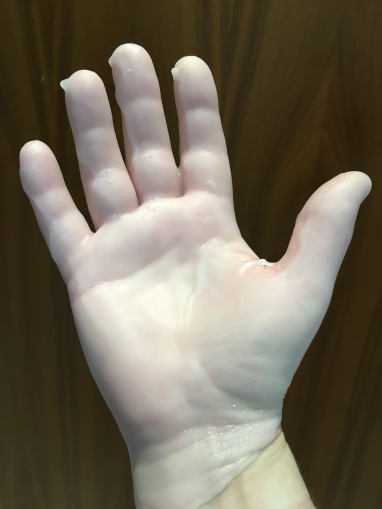 Fully waxed up before massage and removal. Heaven.

As a reward to myself, and to make my journey to London worthwhile, I met up with a couple of friends. In fact the whole of my sixth form music department. Both of them!

One last night over a bottle of wine. One today over much tea.

Today’s meet up was at the Tate Modern.

Sometimes meeting friends, especially good ones, old ones (by which I mean childhood ones – if he’s old then so am I, so we’ll stick to long-lasting friends) is the very best therapy. This was the case.

But I wasn’t just there to drink tea, I also wanted to see the Dora Maar exhibition.

Dora Maar was born, Henriette Théodora Markovitch, in Paris in 1907.

(Louise Bourgeois was born in Paris in 1911)

Dora Maar, daughter of a Croatian father and French mother, was brought up between Argentina and France, her father an architect and her mother owner of a fashion boutique.

Initially a painter she became a photographer, encouraged by her mentors, after studying applied arts and painting in Paris.

I love the solo exhibitions at the Tate (oh, not all of them, but most of them seems fair). I don’t mind admitting that just walking around a gallery doesn’t do much for me, without some context, either a solo artist or possibly a theme – something that I can hang on to, use as a bouncing off point for trying to understand the work.

I always read all the ‘blurb’ in the little guides they hand out. 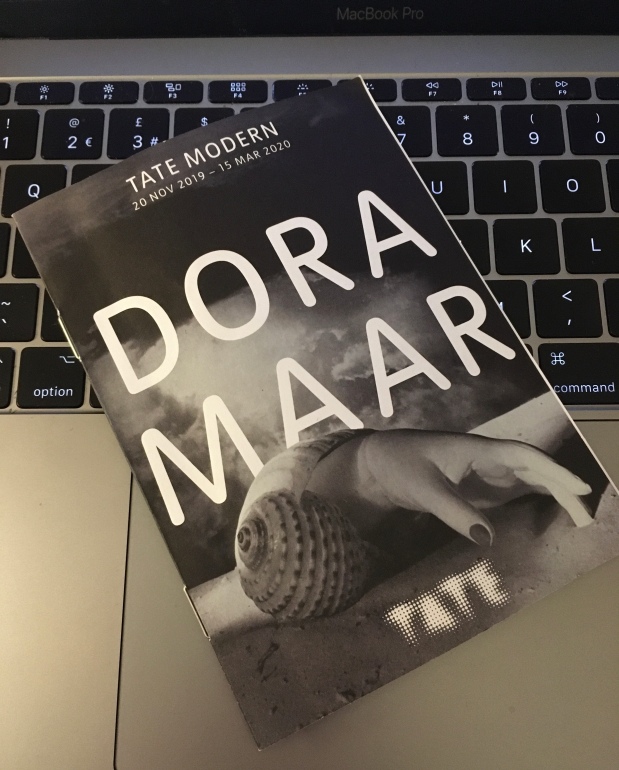 I have often read people discussing the idea that people spend more time reading the descriptions than looking at the pictures, arguing that it’s a ridiculous thing to do. I try for that not to be me, but at the same time, it takes me a while to read and compute all the words before I look, sometimes less time than to really look closely at the picture and appreciate it.

Luckily I’m old and wise enough to just do what’s good for me, but many were the years in which I would try to do what I’ve understood is the ‘best’ way for me to look and appreciate visual art.

Maar got her first photographic studio, on the outskirts of Paris, in 1932 – it marked her transformation from Henriette Markovitch ‘artist-painter’ to Dora Maar, photographer. She was 25 years old.

She had a wide field of practise. She worked in fashion and advertising, travelled to document social conditions and made wildly inventive images, that became part of the onset of surrealism. 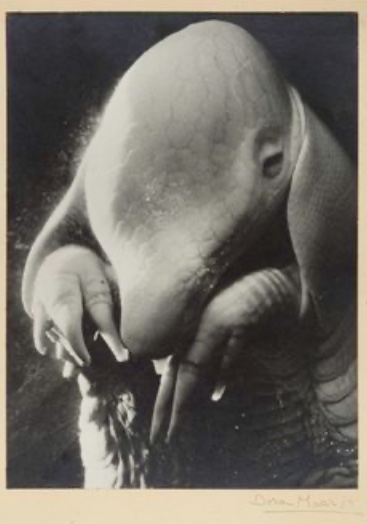 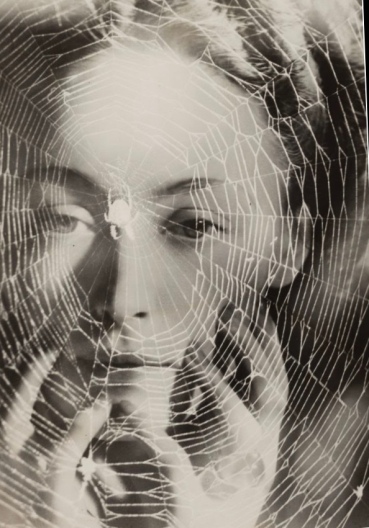 I was interested, when researching her, that André Breton’s name came up several times. A name I hadn’t come across until a few weeks ago.

Louise Bourgeois had an ambivalent relationship with the surrealists and described them, but in particular, André Breton, as ‘lordly and pontifical’. He was the founder of surrealism in Paris, in 1924, with his Manifesto of Surrealism. The principal aim being ‘to resolve the previously contradictory conditions of dream and reality into an absolute reality, a super-reality’.

Surrealism was full of both sexual politics and sexual sport, and they made no apologies for their strictly masculine definition of femininity “A Woman is beautiful to the extent that she incarnates more completely the secret aspirations of man, inciting him to turn over full power to his faculties of sublimation” (Benjamin Peret, Poet).

When Bourgeois finished studying she lived on rue de Seine, in the building that housed Bréton’s surrealist gallery. The gallery was named Gallerie Gradiva, partly in honour of Dora Marr.

Bourgeois said “There were no women among the surrealists, the women that were welcome were the rich women. Which is an insult really. There was no room for any of us and certainly not of my rebellious attitude”

There’s a chance there’s a lot of pertinence in the last sentence, but it is also true that Dora Marr was well off and didn’t need to work.

In1935 Dora Maar met Picasso. She was at the height of her career, he, however, was emerging from a bleak patch in his life and had not painted or sculpted in months. He was fascinated by her dark side – the night they met she sat stabbing the table repeatedly between her fingers with a pen-knife, occasionally missing and causing her silk gloves to be stained in blood.

They became lovers and remained in a relationship for nine years.

They produced work together, pushing one another into new creative territories.

She was the model for many of Picasso’s paintings.

She documented his making of Guernica in 1937, a rare insight into the process of a master

By the end of the 1930s Picasso had persuaded Maar to give up photography and return to painting – the art form of which he was the master. It was effectively the end of her successful career.

Throughout the nine years of their relationship, he continued in his relationship with Marie-Thèrése Walter, mother of his daughter Maya.

Their relationship ended in 1943.

I’ve never been a big fan (or to be honest, any sort of fan) of Picasso.

I’ve been to the Picasso Museum in Paris twice, both many years ago. Twice? Well, let’s just say the second time I really didn’t want to go. Both were long before I had any interest in Visual Art.

In fact, my dislike of Picasso was probably one of my only strong views on any art for many years.

However, on seeing this in the exhibition yesterday, while looking at Picasso’s portrait of Maar ‘The Weeping Woman’ I happened to catch another couple’s conversation:

“Do you think the reason you like it so much is that it’s so familiar?”

“No, it’s because she really does look broken”

And I looked long and hard and was so moved by the pain it contains.

However, I was determined to try not to downgrade Dora Maar to just ‘one of Picasso’s lovers’, as pretty much every piece of literature I’ve read about her does.

The exhibition is really beautiful. Her work is stunning.

I only got halfway around, but I will be returning to see the rest as soon as I can.

It’s on at the Tate Modern until March.

Do go and see it.