Being the Brave (the final) – Damien Hirst and Mickey Mouse

The day was passing fast and I still had two destinations to visit, but there was no denying that the previous day’s early start was catching up with me (to say nothing of the fact that I suffer from chronic (severe?) fatigue, a whole other story). Nothing was going to stop me though. I had a good plate of squid in it’s own ink with polenta and refilled my water bottle with fizzy water (apparently not a good idea, I discovered ten minutes later when it had blown a crack in the mouthpiece and was spontaneously squirting the water, at quite high velocity, into it’s lid, down the outside of the bottle, into my bag and down my jeans…).

My next destination was to Damien Hirst’s latest exhibition Treasures from the Wreck of the Unbelievable. It wasn’t until I came to write this that I discovered the exhibition was in two venues, so clearly I only saw half of it… How did that happen?! Nonetheless, what I saw was enough to provoke reaction, get a good idea of his aims, processes, and to really feel I’d seen his work, so I’m good.
The centrepiece, which you are confronted with on entering the Palazzo Grassi is over 18 metres tall, it is grand, creating a real feeling of wealth, a huge and vulgar contrast to the Diaspora.
A couple of films tell the story of a recent (2008) discovery of a very special and unique underground hoard. A sunken treasure ship called the Apistos (meaning ‘the Unbelievable’) thought to be about 2000 years old. Incredible footage of the beautiful sculptures in varying states of burial, astonishing iridescent colours, with divers finding them and scientists talking about the careful and extensive process of bringing them up from the deep to recover them for this exhibition.

The only knowledge I had prior to arriving at the gallery, was that Hirst had made statutes and had them sunk to the bottom of the sea, but even then the films were frighteningly convincing, and I sort of wished I hadn’t known. With ‘experts’ telling you all about the discovery, the history, the restoration, it really does play with your brain!

As for the staggering expense of the container ships, cranes and full team of divers, before beginning on the artwork I was still to see… well I’ll leave that for you to form your own judgement.

The exhibition that follows is the stunning haul ‘recovered from the sea’, complete with barnacles and other such sea creatures/plants seemingly attached to them. I found the rooms of coins, and similar paraphernalia a bit pointless, but the Disney sculptures (Mickey Mouse, Goofy, Jungle Book) were amusing, and some of the statues were undeniably beautiful. I found his use of colour, in particular the reflective nature of gold and silver, especially in his sketches, completely mesmerising.

I am very glad I spent the time and money at the exhibition. I can see why there is controversy over him as an artist, and especially the financial implications of his work, but it was experience, it was thought provoking, it was inspiring, and now I am better qualified to have controversial opinions about him/it, were I so inclined… 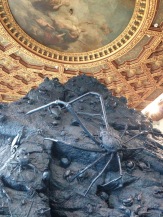 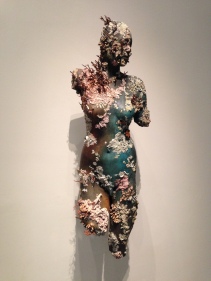 I was flagging, but I had one more aim for the day. The Peggy Guggenheim Museum.
Some people challenge themselves to run a marathon, give up booze for a month, cycle Land’s End to John O’Groats. Mine? To visit all three Guggenheim Museums (Bilbao, Venice and New York) in four months. Would be a shame, under the circumstances, not to fulfil this possibility!

So I loaded up with more ice cream (the really dark chocolate stuff, that’s got to be healthy, no?), and set off for one more blast of art before the end of the day.
Again, as had the Hirst exhibition, the Guggenheim felt a bit of a culture shock. The museum is small, incredible to think it was a house not so long ago, and houses an incredible wealth of ‘famous’ art.
I played a fun game (thinking back I can’t describe how tired I was by this stage!) seeing how much I could name, or at least date or name by style. Testament to the amazing Sarah-Jane Mason, one of my tutors at Leeds College of Art, I was impressed with how much I knew, and since that is one of the main aims of my Getting a Life, it felt good!
There wasn’t any art that particularly stood out (with the exception of the Neon piece by Maurizio Nannucci (b.1939), Changing Place, Changing Time, Changing Thoughts, Changing Future. 2003, which I used as illustration to Part One of this blog, the more overwhelming thought I came away with was that of being challenged to the limits of what art is. I hadn’t questioned it for the full 2 days (indeed, not for a long time), it had not occurred to me to do so, but there in the Guggenheim I was left wondering ‘Really?’.
There were 3 artists that I particularly noted.

Agnes Martin (1912-2004), has several works in the collection, the one that caught my eye is entitled Rose (1965). Agnes Martin described herself as an Abstract Expressionist, and the Guggenheim say of her ‘Rather than representing formal stringency, Martin’s reductive visual language conveys her emotional response to nature and transmits the experience of beauty and lightness’, and of her work, ‘At a distance, the lines of Rose fade, resulting in a sense of an infinite, supernal space’.
I didn’t photograph it, so you will have to google it to see the large canvas, with very faint and fine grid lines drawn on it. In my more relaxed, sitting in the sunshine state, I feel I can appreciate this more. In my tired verging on arted-out state, this was a challenge! I leave you to form your own opinions.

If you are interested though, also look at Carl Andre’s The Way West and Robert Ryman’s Untitled 1973. All three can be found online in the Peggy Guggenheim Collection.

So that was it! A few stops for Venetian cicchetti, a beautiful outdoor evening Aperol Spritz back at the Greenhouse, accompanied by a Soprano and Harpist playing Italian favourites in historic costume (I didn’t pay, so only got a glimpse of this spectacle), and back to my cabin.
A very early start next morning took me straight back to a rehearsal for Beethoven Nine… From one amazing life experience, to another pretty mighty artistic achievement. 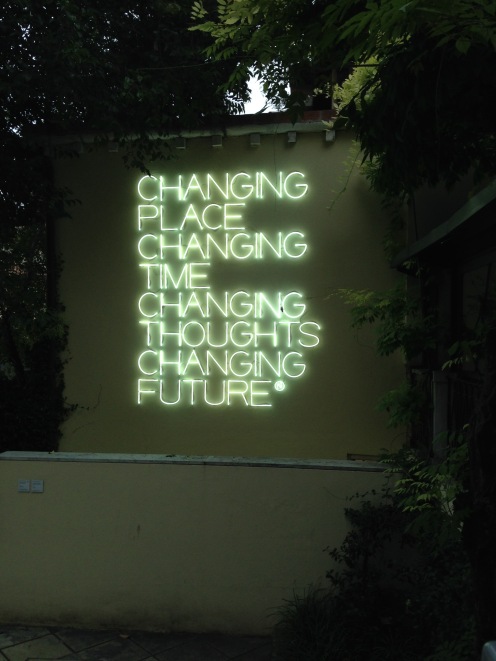