I feel a little like I’m in a fast moving tornado (is there any other kind?), and so I have decided to take a step aside and breathe for a bit.
I am sat in the Caffe La Serra, just outside the Biennale Giardini, Venice. It is in a Greenhouse built in 1894, the oldest purpose built Biennale building remaining here. Obviously the light is amazing, and as I am only sharing it with two elderly local men (one of whom is drinking Aperol Spritz, time check: 10:45… that’s good going!), it is calm and quiet.

So I am on my first adventure! Have pushed myself out of so many comfort zones in the last 36 hours, it is little wonder I need to take a break, and my first cup of English Breakfast tea in that time is doing everything an English(wo)man needs from said brew.

Step One, of Adventure One, really began on stage in the Barbican at 9pm (what a result of a finishing time!) on Tuesday evening. Pleasingly, it was a really good gig, so full of energy, amazing colleagues, and a show dubbed ‘Brexit: The Musical’, an alternative version of Purcell’s King Arthur, pushing boundaries on such relevant topics, challenging audiences to really think about what’s going on in the world. This is something we very rarely get to do, and with the class of our audiences always going to be veering towards the most comfortably off, and more mature in age, it feels good that we are finding ways to put across points that are so close to our hearts. I think it is safe to say that the large majority (I want to say all, but I know one colleague who is pro Brexit, so I have to use the term ‘large majority’. I like to think very, very large majority) of artists are Remainers and the fears of the consequences of Brexit to those of us who rely on travelling the world (but particularly Europe) to do their job is, well, I don’t think I need to explain.
But I digress, back to Venice (while I can still easily get here…).

I left my violin and suitcase with a kind colleague who will return them to me at work on Friday afternoon. Anybody who doesn’t carry an instrument on their back, in the manor of a hermit crab, will not quite understand the extent of the feeling of freedom and anonymity that comes from travelling without it, to say nothing of the heart stopping moments that regularly occur as you wonder where you left it. So there I was, just me and my backpack, legging it to Liverpool Street Station, not because I was desperately in a rush, just stupidly excited.
A train to Cambridge Station, and a quick walk to the Cambridge YHA. I was only ever going to get 4 hours sleep, and I’ll be damned if I’ll spend £110 of my precious funds at Stansted Airport, when I could get a bed for £20 in a dormitory… They had seen me coming and placed a Ben and Jerry’s freezer in the entrance to the reception. Not just little tubs, big ones too. This place was after my heart!
I had bed 3 in room 110, and when I arrived the other three beds were already occupied and polite greetings were exchanged. Have you ever tried to get in and out of a backpack (not literally obviously) in a silent room while strangers are sleeping? Never before did I realise just how earth shatteringly loud zips are! My bed was SO comfy, and my pillow by an open window. It was warm and perfect (for £20). My compatriots, however, had obviously drunk too much though (only suggesting tea), as the four trips to the toilet, plus tossing and turning, or maybe just my excitement, on top of knowing I had to wake at four, meant that I didn’t sleep for any long stretches, and in no time it was 3:50am and no point in going back to sleep.

Hey, back to the present, it’s time to go get on with my adventures, the tea has kicked in and there is SO much more art out there waiting for me! Laters!

And I’m back, Cantina Dospade, San Polo 859. At last, what Matt would called ‘Joined Up’ food. Where you sit down, eat off a plate, with a knife and fork… I cannot wait, the diet of ice cream is wearing thin (obviously that’s just a turn of phrase, can you eat too much ice-cream? Me thinks not!).

So art really is EVERYWHERE in Venice during the Biennale. You cannot turn a corner (mainly because of stationary tourists looking at life through a screen), without finding another gallery.
Shortly after leaving the Greenhouse Cafe I came across these sculptures by Carole Feuerman (1945-), an American artist whose work is hyperrealist. Real beauty, no detail spared, the dripping water on them so hard to believe there isn’t some mechanism dispersing the water there and then. The setting against trees and very traditional Venetian buildings is playful, yet the title of the girl holding onto a black rubber ring is ‘Survival of Serena’. 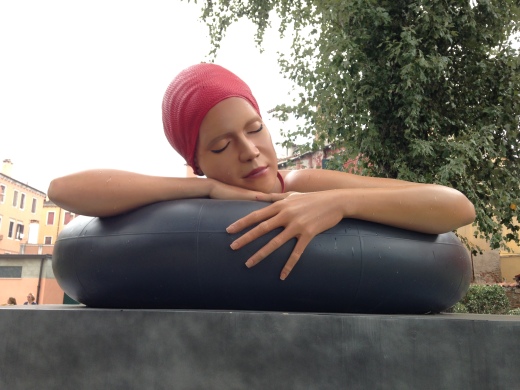 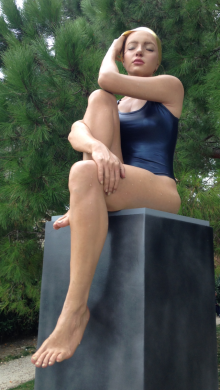 The 4:40am train to Stansted Airport was surprisingly busy, and there were several moments in the following few hours where I was very tempted to suggest to various people that animated conversations were unsuitable for the hour!
But coming in to land in Venice was not a disappointment. I have been three or four times before (mainly work trips in and out, although one was my mother in laws 70th. We booked into an Agriturismo just outside Venice, a quick twenty minutes hop on the train to the centre of the action. Alas, no where did it mention the 100Euro round taxi trip to get to the station…), so it wasn’t the actual sight of Venice that was so special, although obviously this never disappoints, as much as the hazy sunrise. The many many small islands, with the reflections on the shallow water in between. The rippling of the water. The golden colours. The sun literally crawling round each small land mass. One of those moments I’d just love to capture and bottle up for a later date. Exquisite.

Not being able to speak the language is an on going embarrassment in certain countries. I can get away with it in France, Germany (to a certain extent) and Spain quite easily. The Dutch speak English so well you barely notice they aren’t speaking their mother tongue (maybe they don’t have any expectations of anyone else being able to speak their language?). But Italian stumps me every time, and although speaking Spanish to them will more likely get you understood (and tends to be my default ‘language in foreign country’ (with a smattering of Germany thrown in for good measure)), it’s Spanish, and I’m in Italy, so that’s just wrong. Over lunch I was more than happy to talk to the lovely owner of the restaurant (Le Spighe, Via Garibaldi 1341) who told me that as long as you say Ciao and Grazie (“The Americans never pronounce the E at the end of Grazie, and the Italians do”) and smile (I hear you cynics out there… I CAN smile, I CAN!), you will be fine. I have lived by this for the last two days, it seems to have been good advice.

Navigating Venice airport and the water boats. Knowing that I was headed to the east side of the city, away from the central tourist hub, I thought I would simply find the tourist point at the airport and check with them if it was possible to head that way without going through the centre. A very Venetian woman (I hate to generalise, but do tend to find the older generation (particularly) of women are incredibly unfriendly, but maybe that’s just my bad luck) told me I needed a bus to Piazzale Roma and then the boat. I was quite keen to take the boat all the way and suggested this, I can’t tell you how many times she said “No Madame!” in the negotiation required to find out if there was any alternative. This is exactly the type of situation that really fires up my anxiety, so I had to really hold on to myself, make my own decision and hope to goodness I got it right. I think I felt very under time pressure at this point, and quite low on food, I didn’t want to waste the day away just getting there, but did so want to get it right, for me, to feel I had achieved what I wanted, and the way I wanted… and I did! The boat to Arsenale took me straight to the heart of the Venice Biennale. Result.

I started at the Arsenale Corderie, Artiglierie. This was divided into 7 different Pavillions, though to be honest, you wouldn’t have noticed. I had absolutely no idea what to expect, entered into the most incredible building, huge old warehouse style stone building with massively high wooden vaulted ceilings, breath taking in themselves, only to be completely knocked out by the art from the start. It would be hard to describe (and probably mighty boring!) all the art works, but here’s a collection of the things that really caught my attention, no surprises most of them are textile related. 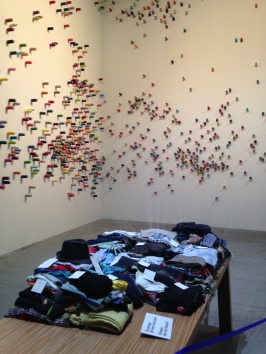 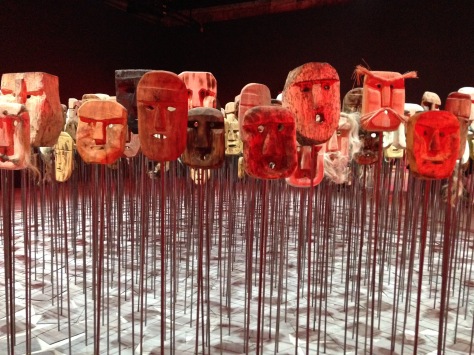 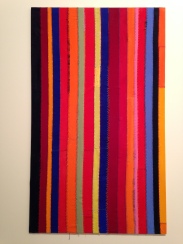 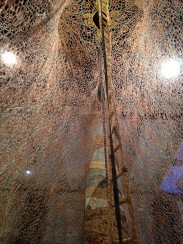 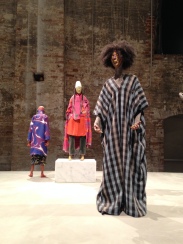 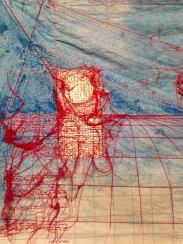 Maria Lai, a section of ‘Lenzuolo’ 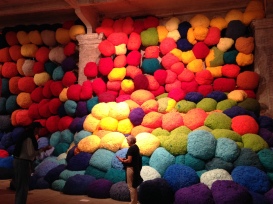 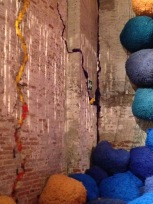 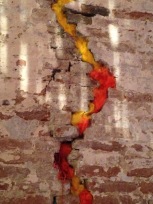 But I think the thing that really moved me most here was the video piece Love Story by Candice Breitz from Johannesburg. It had a big and immediate impact. I had decided not to spend much energy on video installations, there was just so much to see, it was impossible to see everything, I had to draw some lines somewhere. Maybe it was simply because Candice chose to use Hollywood stars Alec Baldwin and Julianne Moore on a large projection, making a point that people will listen to the voice of a celebrity, while those of exiles so often go unheard. Their incredible delivery was attention grabbing, but it was so much more than that. They were telling stories, alternating short clips, horrific stories (in the first person), of refugees, exiles, escaping, swimming for 3 hours while pulling a boat of 20 people as she was a life guard and she felt it was her duty to save them (she felt, she said, she would kill herself if she let any of them die). Being a child soldier, aged 14, given an hours training and then sent to kill. Being in a suffocating truck with your children, not knowing where you were going, just knowing there wasn’t an alternative. Being transgender in India. The narrative is seamless and the character changes indistinguishable. Totally captivating, but on leaving the room, you enter a ‘back room’ with six televisions. Here you can only listen by using headphones. These are the real exiles. You hear them tell their own stories, and somehow having heard it before is just more heartbreaking. It is dark, moving, thought provoking and disturbing. I could have spent hours on this piece. Utterly beautiful.

Time to take a break again.