So, it’s taken quite sometime to get this post written. It wasn’t yesterday (as I claim later in the post) at all, it was actually August. I guess I’ll have to get better at blogging and posting once I really start Getting A Life…

Lots of people have shown interest in how or what I will be doing in my sabbatical time, and when I say I am studying the life and work of Louise Bourgeois, most look on fairly blankly, until I say ‘She made the huge spiders?’, a surprising number (I’d almost go as far as saying the majority) then know who I mean, or have at least heard of/seen Maman (the largest of her spiders, first made for the opening of the Tate Modern in 1999), probably Louise Bourgeois most iconic work.

This post is about my first visit to see Maman.

So yesterday was a pretty special day. I saw Maman for the first time. She is AWESOME!
It wasn’t part of my ‘getting a life’, as such, that doesn’t officially start until November, but I was working in Bilbao, and had a small window of opportunity. A chance most certainly not to be missed.
But before you begin thinking ‘working in Bilbao’ how lucky is she… let me give you more of a flavour of how that went… I was on tour with the Academy of Ancient Music, an orchestra I have worked for for 21 years. There were only 11 of us on the trip, and I also had G (my 12 year old son) with me.
We flew to Barcelona on Wednesday, arrived in Girona late. Somewhat rashly, we went out for a long dinner and went to bed late. OK for those who could sleep in next morning, but my son was having none of that, and we spent the morning exploring the beautiful town of Girona (and getting lost in El Corte Ingles!). Work didn’t start till 4pm. We travelled, rehearsed from 5 till 8, the concert was from 10 till midnight, we eventually got into bed at about 1.45am, and left again for the airport at 7am… Another seven hours travelling and we got to Bilbao with 2 hours to kill before more travel to the gig (I admit it, it was a coach journey along the north coast, the scenery was stunning!).
Anyway, enough of the details of the drudgery. I had two hours to see Maman! Arriving by coach from the airport, we drove past the Guggenheim and I was so touched to find G almost as excited as me at our fist glimpse of her mighty body, I almost couldn’t believe it was really her. I was really there!
We rushed to drop our belongings in the hotel and walked the ten minutes down the beautiful Nervion River. G insisted on filming my reaction as we first saw her (but my double chins rather got in the way of my beaming face, so not for public consumption!).
As you approach, at over 10 metres tall, Maman seems rather intermingled with the complex structure of the Puenta de Los Principes de Espana (the cable stayed suspension bridge, built in the seventies which gained popularity when the Guggenheim Museum Bilbao was built right under it, literally merging its structure into the museum’s). Her tallest leg seemed to form the top of an archway, another limb forming a second archway, but on gaining ground it was all too clear that here she was, in all her glory (she was quickly renamed ‘Yo Mumma’ by G).
It was Louise Bourgeois’ spiders that I was first introduced to, at an exhibition of her work at GEM (Museum of Contemporary Art in the Hague). I was visiting Luis Emilio Rodriguez Carrington, a fabulous bow maker, who I have often likened to Olivander (Harry Potter’s wand shop owner). He is an incredibly perceptive man, and while having lunch at GEM he pointed to a picture of Louise Bourgeois (Robert Mapplethorpe’s, 1982, photograph of Louise and Fillette, an extremely phallic sculpture, which she has nonchalantly tucked under her arm). She has such a glint in her eye, and Luis Emilio pointed at it, and so casually commented ‘She doesn’t look like a woman who cares what other people think about her does she?’. I am only sad that I didn’t take the time to really see the exhibition. I had no idea of who she was, though I have clear memories of the spiders outside, and he had sown a seed that begun germinating that day.

Spiders were a theme that ran throughout Louise’s work from as early as the late 40’s, and really began to take regular importance in the mid 90’s. There is so much speculation about why spiders and their significance in Louise’s life.
I think the most simple explanations are two things she said.

Firstly in 1998, “The theme of spiders is a double theme. First of all, the spider as guardian, a guardian against mosquitoes… It is a defence against evil… The other metaphor is that the spider represents the mother”.
The Bourgeois family business was restoring old tapestries, and Louise started helping her mother out from a very early age (she became an expert at drawing feet, since this was a common bit of tapestries to be worn away).
“I came from a family of repairers. The spider is a repairer. If you bash into the web of a spider, she doesn’t get mad. She weaves and repairs it.”

Ode à ma mère (1995) is an illustrated book, comprising a collection of 9 drypoint spiders (Drypoint is a printmaking technique, in which an image is incised into a plate, traditionally copper, but now more commonly acetate, zinc, or plexiglass, using a hard-pointed needle or sharp metal point).
The text is a poem Louise wrote:
“The friend (the spider – why the spider?) because my best friend was my mother and she was deliberate, clever, patient, soothing, reasonable, dainty, subtle, indispensable, neat, and useful as an araignée. She could also defend herself, and me, by refusing to answer ‘stupid’, inquisitive, embarrassing personal questions.
I shall never tire of representing her.
I want to: eat, sleep, argue, hurt, destroy
Why do you?
My reasons belong exclusively to me.
The treatment of Fear.”

There is also speculation of a link to the Greek Myth of Arachne. A mortal who claimed her weaving was better than that of Athena. They had a contest to prove who was best, Arachne depicted ways the Gods had misled and abused mortals, particularly Zeus, tricking and seducing women. When Athena saw this she was enraged, and turned Arachne into a spider.
This is a very potted version of the story (of which there are many many versions), but I do love the connections that can be made with Louise’s relationship with men, and particularly her father. But that is a whole other story… 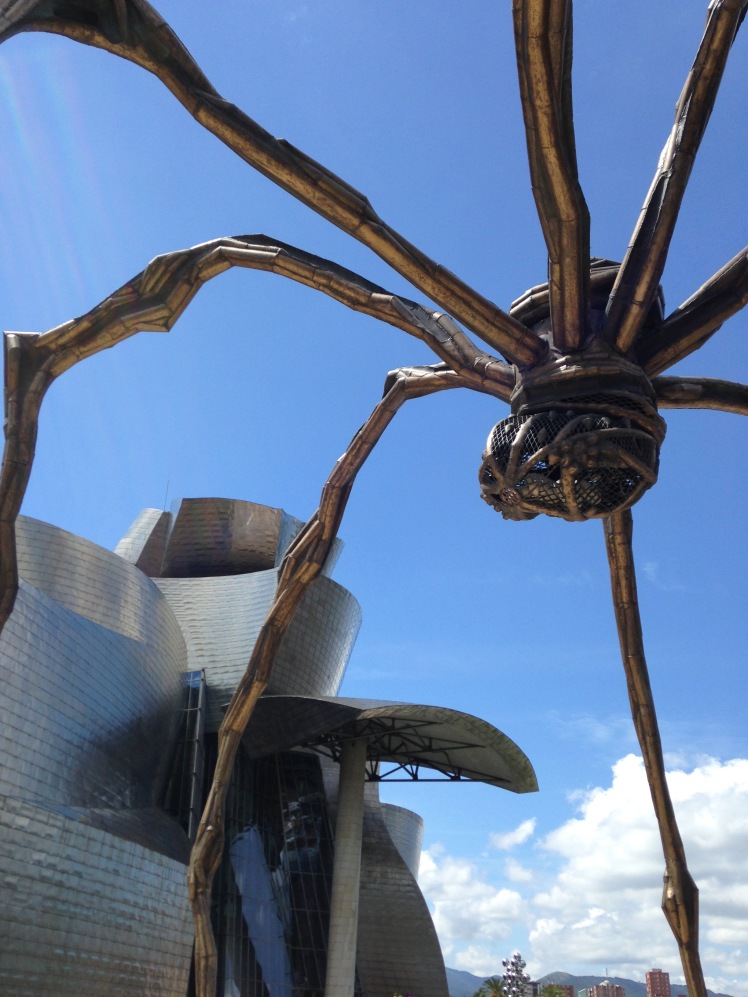 One thought on “Maman”